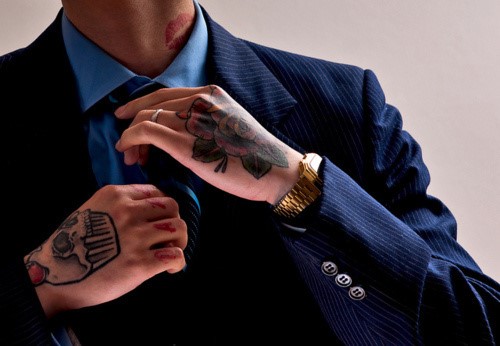 I have been a career counselor for undergraduate and graduate students for a long time (over 25 years) and have seen a lot of changes in industry and recruitment during this time.  For example, “Casual Friday” was just becoming a thing back in the mid ‘90s; “professionally-appropriate” dress for interviews based on assigned gender was also very different – women were told to wear skirt suits to an interview with panty hose and low heels.  We now talk about how tattoos should not be visible and piercings should be minimized.

A good friend of mine got his first tattoo in his 30s (so presumably, he understood the permanence of this body mod).  It was a full sleeve that ended at his wrist.  This way, it wouldn’t show at work when he wore long sleeves.  Then he got more, all in places that could be easily covered and wouldn’t be seen at work.  When he got a skull tattoo on his neck, I gasped as it peeked out over the top of his collar.  “How will you interview successfully for a job?” I asked.  He replied that he wouldn’t want to work for a place that didn’t accept him as he is, a place like that would not agree with his values.  Now, he’s covered in tattoos, including on his hands and fingers, several on his neck, and has one inch gauges in his ears.  He doesn’t regret a single one.  He works as a counselor for a non-profit where his body modifications often make him more accessible to the population he serves.

That conversation has always stuck with me and was a perfect example of how you must consider your values to find the right fit in career decision-making and job search.  And, values change, so what is important to you now, may not be as important later (consider the person who gets a tattoo that he or she later regrets.  That may be a painful way to truly understand what is important to you, especially if you have the tattoo removed).

In a USA Today story from 2014, Joseph O’Grady, Professor of Business at Champlain College in Burlington, VT, said “the issue of tattoos on the job is an interesting example of how business traditions, new social norms, and legal issues collide in the modern workplace.” O’Grady goes on to say

There are three underlying concerns employers have with hiring people with body art…They are:

O’Grady’s advice is to “feel out” prospective employers’ preferences before applying – to visit the workplace and scout out the dress and appearance practices and look up some current employees on LinkedIn. Simple observations can indicate whether individual expression is encouraged in that workplace or not, he said.

In my role at UNC-Chapel Hill, we frequently engage students in self-assessment exercises and help them reflect on what they learn.  Here at UCS, we offer Focus 2 which has a module on values, as well as a values card sort that can help you understand what is important to you.

As O’Grady suggests, it’s equally important to perform research on the employer.  This can involve reviewing the organization’s website to understand their mission and values and how these play out in the work they do.  You may want to conduct informational interviews with employees to learn whether the organization’s online branding matches up with their practices.

But, as Bob Dylan crooned way back in 1964, “the times they are a changin’.” What is questionable now with regard to visibility of body modifications may be the norm in the future. Change is the only constant in life – Heraclitus